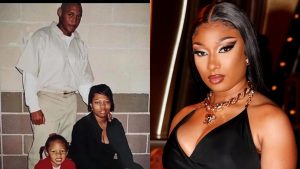 Joe Pete is the father of multiple award-winning female rapper, Megan Jovon Ruth Pete, known professionally as Megan Thee Stallion. In this blog, we will dive into the personal life of her dad to know more about him – why he was jailed, his marital life, and whether he is alive or dead, among others.

Joe Pete, born Joseph Pete Jr. is a celebrity father who happens to be the father of rapper Megan Thee Stallion. He is said to be a hustler who went the extra mile to make his family happy.

Though he is a celebrity father, he has managed to keep his personal life away from the public as his date and place of birth have been kept a secret. He was married to his beautiful wife Holly Thomas and together they have only one child who happens to be a rapper.

Megan’s father was in prison before she was born. Joe got involved with the law and he was jailed on charges relating to arms.

He was imprisoned for the first eight years of Megan Thee Stallion as he was released after serving his jail term when the rapper was 8 years old.

Is Joe Pete still alive? Where is Joe Pete today?

Joe Pete is no more as he passed away when his daughter was a teenager. 7 years after he was released from jail, in 2011, he passed away, however, his cause of death has not been disclosed by his family to date.

As of the time of his death, his daughter was 15 years old.