Jordana Brewster who was who was a co-star of Paul Walker in Fast and Furious movie shared some images of Paul Walker which have never been seen before. She did this on his 9th anniversary after he passed away.

In a touching Instagram post on Wednesday, the actress revealed the images, which she claimed were taken by an on-set photographer in between takes and sent to her a few days after Walker’s passing. 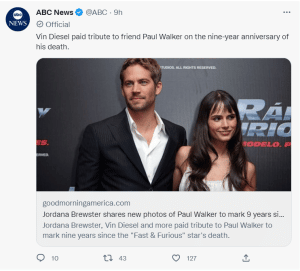 She praised the images, saying that they remind her of Paul’s playfulness, openness, and joy.

She also stated that she didn’t understand why or how someone so full of life could have been gone from her so quickly nine years prior.

Brewster wrote in his final sentence that Being present, loving, and doing good are the three things she can do to respect his memory the best.

The late actor’s only kid, Meadow Walker, also responded to Brewster’s remark by referring to her father as her favorite soul. On Instagram, the 24-year-old also paid respect to Walker on the occasion of his passing.

Walker passed away in the middle of Fast and Furious 7 nevertheless, they finished it with the help of the others.

After the actor passed away, Walker’s character, Brian O’Conner, was not killed off but rather retired at the conclusion of Fast and Furious 7.