Fashion label Balenciaga has issued an apology for an ad campaign that some have criticized for sexualizing young people.

The advertisements, which appeared on Instagram, show kids holding teddy bear bags covered in what seems to be bondage attire.

They also feature what appear to be court records addressing child pornography. Against “the persons responsible for building the scene and inserting unapproved things for our spring 23 campaign photo shoot,” the business claimed it is pursuing legal action. 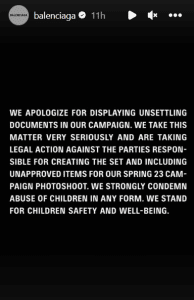 On social media, the images were called “creepy” and “disturbing.” The advertisements show young children holding teddy bears decked out in chains, fishnet stockings, and other accessories.

In another image, a document that appears to be a document from the 2002 Supreme Court case Ashcroft v. Free Speech Coalition, which partially overturned the federal Child Pornography Prevention Act, is hidden under a black purse.

The plush bear purses should not have been shown with children in this campaign, according to Balenciaga, which claimed to have withdrawn the advertisements from all of its channels.